ON BEING NOT WORRYING, August 2014 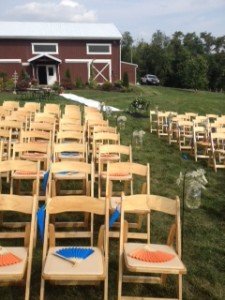 The party had been going on for a while, and there were many people in the room. Julie sat in a chair, feeling friendly, but, as often is true for her, unsure of where to put her conversation. Next to her was a lively family pair…

“Oh, dear Emily, “ said the grandmother to her adult granddaughter, “Did you hear the restaurant near the park has been rented?” The young woman replied she had not.

“But, it has,” grandmother repeated, “ My neighbor just told me.” Emily did not answer.

“Don’t you want to know who took it?” pushed the older woman.

“Oh, if you want to share it, of course.” returned the dutiful granddaughter.

It was all grandmother needed. ‘‘Why, my dear, my neighbor says a man who does Mediterranean cooking bought it; he came into town on Monday, and, he liked it so much he will be purchasing it and have a restaurant open by Christmas.

“What is his name?” Emily held up her part of the conversation.

“Garrison,” said grandmother, “It seems he might be single.”

“Oh, yes! Yes, she ran into him on the sidewalk looking at the building and struck up a conversation.  He was quite easy to talk with!” *

Julie listened. She thought they might include her if they wanted to. It wasn’t personal or intimate — just gossip. But, they kept their conversation to themselves and Julie’s inner roller coaster dialogue defined her. She shrunk inside and moved away.

“Well, of course they are excluding me,” she thought,” I am not in their family.  They probably don’t like me,” she talked to herself. “Well, maybe that’s true, maybe it isn’t.  Here I am again, not really fitting in,” Julie sighed and thought, ” Oh, maybe I should leave.”

In that moment Julie remembered the recent lecture she had heard encouraging her to identify with her “being”, rather than her ego. The speaker had suggested that simply changing one’s internal point of attention can transform how you experienced any moment.

Julie shifted from her inner arguments, which her ego was generating, and instead moved her consciousness to her “beingness.” She felt her torso — felt her heart beat, experienced her torso connected to her legs, and looked for the peaceful place the lecturer had suggested was always inside her. She found it faster than she thought she might.

She was bathed in peace, and yet still in the room. She felt peacefulness and calm – just as the lecturer had suggested. It had no past or present, and, yet, she felt more alive. She was a little more aware of herself and the whole room.

She saw her friend Bill, across the room, and realized she wanted to talk with him. She had not seen him in a long time. She went across the room and sat next to him. He welcomed her with a smile.

“How are you?, “ he asked. “What are you doing? I hear you are in law school. Are you enjoying it?” His kindness flooded towards her, and she shared about her life.

“And you,” Julie asked questions this time, ” I hear you are working for computer company, now? ” She asked about him.

Things flowed easily. It was as if being in that peaceful spot also gave rise to peace all around her and in her experiences. The people around her seemed more peaceful and calm, as well.  The rest of the visit was easy.

Julie felt as if she had found the magic pill which could transform every moment of her life –and it was in her.

* Up to here, this dialogue is modeled on the first chapter of Pride and Prejudice by Jane Austin. Her story reflects the ups and downs of a culture run on categories of convention and class standing.  No matter what the setting or times, we often keep our consciousness in a place which is defined by categories.  As we read along, we will see Julie, our heroine, willing to put her consciousness in a new place.

** This place of peace is available to each of us. See Eckhart Tolle — The Power of Now, and Milton’s Secret (for children); Thich Nhat Hahn — Being Peace, The Miracle of Mindfulness, and Peace is Every Step; the Dalai Lama — The Art of Happiness; Pema Chodron, woman Buddhist teacher, The Wisdom of No Escape & Start Where You Are.                JDWhelden  August ’14  Philadelphia, PA

PrevPreviousWHAT IS TRUE POWER?
NextCelebrating the The Jewish New Year – Islam: What Can We Learn?Next

Keep up-to-date on news and events!