Golly – I am a few days late on this month’s blog.  Really, I am just getting settled back in Madison, 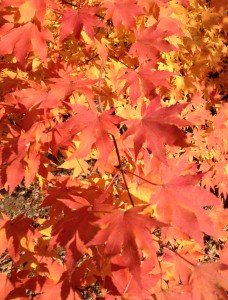 Wi and I have been overtaken with moving and setting up my work here.  Loving being back in the Wisconsin Fall.

My deep thinking during all this has been about consciousness and my next two books.  They are the memoir on my own growth into high consciousness and a murder mystery!!  Here are a couple opening draft paragraphs from both.

That storm began a few weeks earlier. It was a Sunday afternoon. I had come home after being at a friend’s house and my father was rushing towards me, across the living room blue and red Persian carpet. I could feel his urgency, but also his inherent kindness. He was not abrupt, but he was clear.

“Jody, call your sisters,” he told me where they were. “Tell them they must come home.” Did he tell me then what was going on? Did he wait till the ambulance came to tell me? I do not remember. But, soon I had both of my younger sisters on their way home. He turned to me, the oldest at 12 yrs old, and gave information and direction.

“Your mother is ill. We are taking her to the hospital. Pete is coming,” Pete was one of my mother’s good woman friends. “Don’t go in our bedroom while I am gone. Wait for Pete.” Did he tell me why Pete was coming? Did he tell Meg and Beth the same things? Did I? Did he tell me to take them to the large children’s bedroom which I shared with Meg? Was that my idea? Over 50 years later, I still don’t have these answers.

I know Pete came, but I don’t remember her being there.  I remember sitting on the window seat in the children’s bedroom with my two sisters, 10 and 5. I remember watching the ambulance drive down the long dirt driveway and seeing my father follow in his car. I remember we were 3 children alone in the house. I knew I was in charge.

I said, “We should pray.” And with that, three sisters bowed their heads and prayed. Blessedly, we were surrounded by a beautiful pine and birch woods and at the end of the lawn and dirt road was the mile-around small clear spring-fed lake. The peacefulness of the setting soothed me. I remember the comfort I found in the decision and in praying. I remember the three of us on that window seat — guarding our emotions, but, gathering support from each other. It was 1961 in the country. Three children alone in a house was not risky or dangerous. We knew Dad would return soon. My job was to be responsible, and I think we all assumed I could handle it…. 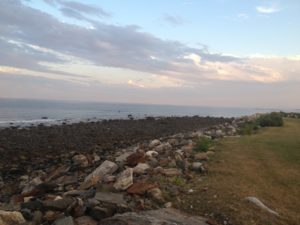 Jacqueline stood on the rocks near the ocean. She had left her pickup truck about a 1/2 mile away, and walked here from her motel unit. After three days in the truck, she had decided to go for a bed and a roof. She thought she was well ahead of Rick, for now. Tomorrow, she would drive several hours to her friend Maria, sell the truck and think about what the next step would be.

Her walk had brought her to this long private road into this enclave of large million dollar houses circled around a vast shared lawn. In the middle of the lawn was a tall flag pole.  The wide and long grass expanse lead down to the rocky shore of the ocean, where she stood. Far out at sea, the sun was near the water edge. The colors were changing from bright yellow to deep orange as the circle of fire began to disappear.

Jacqueline pulled her arms closer as she pushed her fists into her jacket pockets. The muscles in her chest relaxed as she filled her lungs, allowing her to absorb the life force of the waves and the moist air on her skin. She breathed in the ocean and felt it’s freedom. She had so wanted to fall onto the motel bed and sleep – but her intuition had told her to first walk to the ocean.

Suddenly, behind her, there was a large explosion — sound first and then billowing snaky smoke over the trees. It came from the direction of the motel.  Jacqueline knew it was Rick. He had found the truck and blown it up.  She looked around at the vast open space of lawn, shore and ocean. She ran towards the only cover, the nearest house.  In the house’s driveway, with a glance backwards, she saw dust kick it’s way above the houses on the curve of the long drive into the enclave. Rick was headed her way.  She pulled at the fence gate to the house’s back yard and it opened. Inside, she felt a hedge on her left and stepped onto the stone paved walk.

“Hey, who are you?” a 50ish year old solid and muscled man holding a dog leash stepped onto the walk from near the house. The dog was near by – a Royal Spaniel. They both look at her.

Out of the corner of her eye, through the slatted fence, Sandra glimpsed Rick’s blue Jeep swing down the open drive past the first million dollar house.  He would be in front of this house in seconds.

“I need the cover of your house,” her voice was insistent. Sandra tensed her muscles for flight, in case she needed to escape from this man. She thought about options. The high fence behind her still protected her from being seen from the road. She might need to run around the house and look for a way away from the house. She could not go back through the gate – Rick was on the other side, now. She heard the door to the Jeep open. She looked straight into this man’s eyes, evaluating him for danger and plotting her next move, if he would not shelter her.

Ben looked back at the 40 something, tallish bleached blonde, dressed in jeans and yellow T-shirt, encased in a wrinkled cotton jacket. He heard the strong voice. In a matter of seconds, he decided.

“Lady, you picked the right house. Molly,” he called out.  A petite brunette in her late 30’s came out of the sliding doors.  “Hide her inside. I am going to take care of this guy.”

“Give him a little room, and no explanation,” Jacqueline coached as she entered the house. “He’ll want you to be on his side – and he can be fooled.” She disappeared with Molly.

Detective Benjamin Slade of the Bourbon Beach police sat down in his chair facing the gate and looked around his yard.  He was annoyed at her advice. He didn’t need any. He picked up the book on the table and pretended to read, his eyes lifted just above the pages. Angel lay under the table, her head on her paws, but her eyes open.

Keep up-to-date on news and events!